By Rick and Susie Graetz

Indians migrating through this territory north of the Missouri River called them “the island mountains.” From a distance, they resemble atolls rising from the prairie sea of north central Montana. Although not very lofty (the highest point is 5,720-foot Antoine Butte), they reach 2,500 feet above the surrounding plains and can be seen from 75 miles away. To the people in towns like Roy and Malta, this 50-square mile mass of igneous and sedimentary rock is a favored landmark.

Much of early-day Montana can be described as being the Wild West, but the Little Rocky Mountains and the country rolling south into the Missouri Breaks was perhaps the epitome of the Old West etched on movie screens. A little over 100 years ago, the characters of those times ... cattle barons, gold seekers, outlaws, cowboys, vigilantes, rustlers and horse thieves went about their ways here. And before they were forced off the land, the free-roaming Plains Indians hunted enormous bison herds that passed in the shadow of these mountains.

Gold brought the white man into the gulches of the uprises of Montana. There are records of an 1852 gold find, but mining didn’t begin on any scale until the finding of “color” in southwest Montana in 1884.

In 1893, Pike Landusky hit it big in a canyon near the site of the town named after him. At about the same time, gold was also found to the northeast in Ruby Gulch. Here, Pete Zortman established a mill to extract the precious metal from the ore. The town that grew up below the bonanza took on his name.

One of the Little Rockies most written about happenings involved a bar room killing. Pike Landusky, himself a legend, met his end at the hand of Harvey “Kid” Curry, one of the wild Curry Brothers Gang, who frequented the Little Rockies. The stories vary, but the shooting supposedly took place in 1894 during a Christmas celebration in Jew Jake’s Saloon. This event started “Kid” Curry on the outlaw trail for real as he joined up with the likes of Butch Cassidy and the Sundance Kid. A hideout in the badlands south of the mountains kept them safe from “the long arm of the law.”

The Little Rockies’ beginning as a roaring, almost lawless frontier outpost fueled by the shiny nuggets of small placer claims, soon evolved into a rich mining district. This mineral extraction business culminated in 1979 with the development of a large mine by Pegasus Gold. In 1998 though, bankruptcy shut it down; today reclamation of the mine is underway.

Though they did use it for vision quests, early-day Indian tribes feared the island range as they believed bad spirits lived there. Eagle Child and Mission Peak were, and still are, sacred points to the Gros Ventres. Tribal medicine men climbed them to fast and meditate. Legend has it that no one ever stayed beyond three days ... terrifying visions forced them to retreat.

Today, the tribes are working on developing the tourism potential of the mountain segment of their reservation. When mining reclamation is completed, a road will be constructed crossing the Little Rockies (it was there in the past) connecting Zortman (off the Reservation) with Mission Canyon on the southwest side of the range.

Zortman is the “capital” of the non-reservation part of the Little Rockies. The picturesque Catholic Church on the mountainside overlooking town was built by the Whitcomb family in 1911. This historic little white building, used today by several religions, is a favorite wedding chapel for locals and visitors alike. “Main Street” features a cellblock from the first jail as well as two of the original settlement buildings, the Miner’s Club and Kalal’s Bar. A side trip to the old wooded cemetery is both peaceful and interesting. Hard economic times, owing to the closing of the Pegasus mine, have not thwarted community spirit; while preserving its history, the town is also looking toward new opportunities. The Little Rockies’ blend of trees and water, prairie, river breaks and mountain scenery coupled with a colorful past, is viewed as a very good, long lasting asset to be celebrated. Hiking trails will be developed, rock climbing is gaining popularity, gold panning is a major activity (rubies and garnets are also found) and hunting on the land beyond the mountains is being promoted.

On the flat land surrounding the Little Rockies, ranching continues to be the main economic factor. Old time outfits like the Matador Ranch keep the tradition alive. 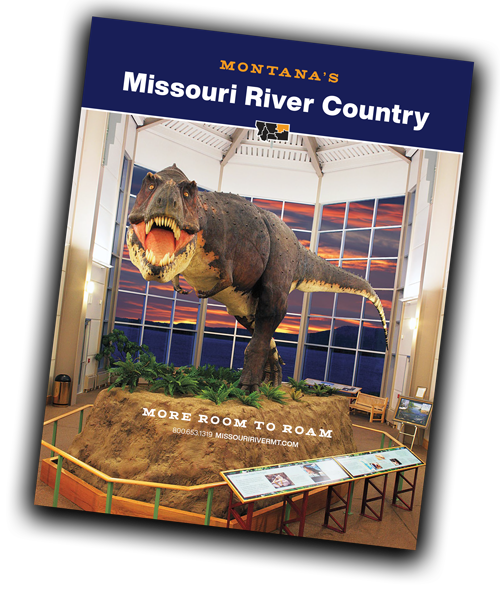 Montana is open for exploration, and we know more room to roam is at the top of everyone’s list right now. We welcome you to enjoy the fresh air and open spaces of northeast Montana. Missouri River Country prioritizes the health and safety of our citizens and visitors, and we are closely monitoring the rapidly changing public health situation. We ask that you do your part by following these safety guidelines:

Thank you for joining us in keeping our region safe, clean and beautiful.